The history of transgender rights in the UK

The battle over gender rights and identity has taken on huge significance in the past few years. But our understanding of transgender issues has a long and complex history, which is helping shape the present legal landscape.

In 1951, Roberta Cowell made history as the first known British trans woman to undergo gender-reassignment surgery. ‘Betty’ Cowell, formerly ‘Bob’, had previously been a racing driver and a Spitfire pilot in the Second World War, happily married with two children. After telling her wife about her plans to transition, her wife severed all contact, and Roberta’s children—Anne, six and Diana, four—grew up without any knowledge of their missing father. Roberta Cowell died in 2011 in her flat in west London, alone, with just half a dozen people at her funeral.

Since Cowell’s transition, knowledge and awareness of transgender people has grown by a significant margin. Gradually, the word ‘transsexual’ has been phased out in favour of ‘transgender’, a more inclusive term to describe someone who doesn’t identify with the gender they have been assigned at birth, but may not have had gender reassignment surgery.

Since 2000, the legal rights of trans people have begun to be entrenched more seriously in UK law. Since Caitlin Jenner came out as a woman in April 2015, an even brighter media spotlight has been placed on the trans community, particularly on trans women, and celebrity activists such as Laverne Cox and Munroe Bergdorf have worked to promote the cause and link it to wider struggles for equality happening in the UK, the US and across the world.

In 1963, fashion model April Ashley (who transitioned to become physically female in 1960) and Arthur Corbett married; by 1963, the marriage had broken down. When the marriage was eventually annulled in 1970, it was on the basis that the court considered Ashley to be male, though Corbett had been aware of Ashley’s transition at the time they wed. What came to be known as the Corbett v Corbett divorce case established the legal precedent that a person’s sex couldn’t legally be changed from that which is assigned at birth. From Corbett v Corbett onwards, members of the trans community were confined to an awkward space, unable to inhabit fully their genders and bodies in the eyes of UK law or society. 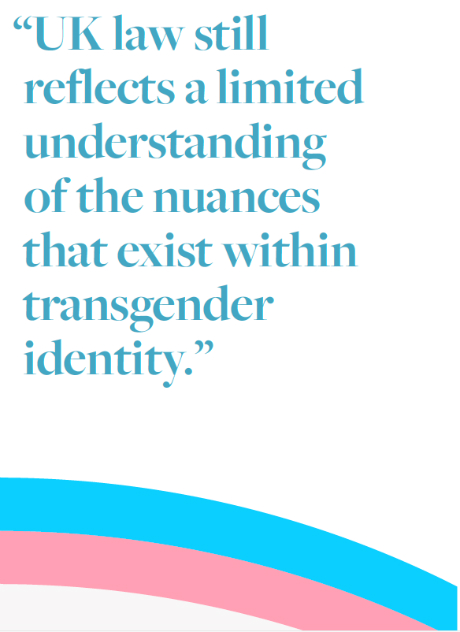 As the 20th century progressed, more and more trans people begin to take cases to court on the grounds of discrimination in the workplace and wider society. In 1986, trans man Mark Rees brought a case to the European Court of Human Rights, complaining that UK law prevented him from gaining legal status that recognised him as male. Though he didn’t win his case, the court discussed at length the legal marginalisation of the trans community—a theme that would be revisited in Goodwin v United Kingdom (2002).

The workplace, too, provided a space for discrimination. In 1996, the milestone case P v S and Cornwall County Council saw that a woman, named as P in court proceedings, had been dismissed from her workplace after informing employers that she was undergoing gender-reassignment surgery. After taking her employers to an employment tribunal, the court ruled that she was wrongfully dismissed; it became the first piece of case law to prevent discrimination in employment or vocational education on the basis of someone being trans. These subtle shifts in the 1980s and 1990s set the stage for more changes during the course of the 21st century. The early 2000s saw the slow beginnings of the legislative codification of trans rights under successive Labour governments.

In this more liberal climate, Goodwin v United Kingdom (2002) provided landmark change for the trans community. Christine Goodwin had faced sexual harassment at work during and subsequent to her gender reassignment. She complained to the court that due to her male legal status, she was forced to pay National Insurance contributions until the age of 65 rather than 60. Goodwin also stated that because her NI number must remain the same under UK law, her employer was able to find out that she had worked for the company previously under a different name and gender, which resulted in more humiliation and harassment. Further to this, the court heard that another woman, referred to as ‘I’ in court proceedings, had been refused a place on a nursing course after she refused to present her birth certificate.

The individuals protested the lack of legal recognition of trans people, their gender and their post-operative sex, and their poor treatment with respect to employment, social security and pensions, as well as their inability to get married as either male or female. The European Court of Human Rights ruled in 2002 that UK law violated the right of transgender people to a private life, and the right to marry and start a family. Judges ruled that the UK Government should help trans people by issuing new birth certificates to reflect their gender identity, and permit their marriage to an individual of the opposite gender. Here, the Government was held directly accountable for the lack of protections for the trans community. For the first time, the lawmakers were forced to provide for the oppressed minority, recognising their gender identity and right to the same freedoms as other individuals.

This UK Government’s loss of the Goodwin case resulted in the introduction of the Gender Recognition Act in 2004, perhaps the most significant and wide-reaching piece of trans-focused legislation. Under the Act, the government awarded trans people full legal gender recognition and allowed them to acquire new birth certificates. Rather than being denied or dismissed, trans people had their personal identity recognised here for the first time in UK law. These moves towards acceptance culminated in the Equality Act of 2010, which, among other things, banned discrimination in the workplace and wider society on the basis of gender reassignment.

Despite these steps, UK law still reflects a limited understanding of the nuances that exist within transgender identity. Birth certificates and passports in the UK still only allow for the options ‘male’ or ‘female’, meaning that non-binary individuals aren’t recognised by law. Other western states are leading the way: Ontario became the first Canadian province to offer non-binary options on birth certificates in March 2018, denoted by an ‘X’. Though Gendered Intelligence was founded in the UK in 2008 to spread understanding of gender diversity, it’s only over the course of the last few years that the concerns of nonbinary individuals have been included in the wider conversation about trans rights. Perhaps enacting legislation to promote the ‘they’, rather than simply the ‘he’ or ‘she’, will be the next big shift over the following decades, as our perception of ‘gender’ changes and develops.